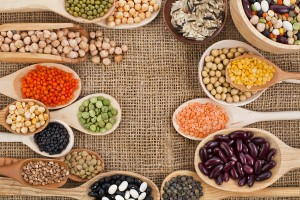 Being vegetarian does not mean your diet will be lacking in protein. Most plant foods
contain protein and in fact it would be very difficult to design a vegetarian diet that is
short on protein. Excess dietary protein may lead to health problems. It is now thought
that one of the benefits of a vegetarian diet is that it contains adequate but not
excessive protein.

of proteins is consumed, the amino acids in one protein compensating for the
deficiencies of another.

acids commonly found in plant and animal
proteins. Amino acids link together to form chains called peptides. A typical protein may
contain 500 or more amino acids. Each protein has its own unique number and
sequence of amino acids which determines its particular structure and function.
Proteins are broken down into their constituent amino acids during digestion which are
then absorbed and used to make new proteins in the body. Certain amino acids can be
made by the human body. However, the essential amino acids cannot be made and so
they must be supplied in the diet. The eight essential amino acids required by humans
are: leucine, isoleucine, valine, threonine, methionine, phenylalanine, tryptophan, and
lysine. For children, histidine is also considered to be an essential amino acid.
Proteins are essential for growth and repair. They play a crucial role in virtually all
biological processes in the body. All enzymes are proteins and are vital for the body’s
metabolism. Muscle contraction, immune protection, and the transmission of nerve
impulses are all dependent on proteins. Proteins in skin and bone provide structural
support. Many hormones are proteins. Protein can also provide a source of energy.
Generally the body uses carbohydrate and fat for energy but when there is excess
dietary protein or inadequate dietary fat and carbohydrate, protein is used. Excess
protein may also be converted to fat and stored.Dietary Sources
Most foods contain at least some protein. Good sources of protein for vegetarians
include nuts and seeds, pulses, soya products (tofu, soya milk and textured soya
protein such as soya mince), cereals (wheat, oats, and rice), free-range eggs and some
dairy products (milk, cheese and yogurt).
Different foods contain different proteins, each with their own unique amino acid
composition. The proportions of essential amino acids in foods may differ from the
proportions needed by the body to make proteins. The proportion of each of the
essential amino acids in foods containing protein determines the quality of that protein.
Dietary proteins with all the essential amino acids in the proportions required by the
body are said to be a high quality protein. If the protein is low in one or more of the
essential amino acids the protein is of a lower quality. The amino acid that is in shortest
supply is called the limiting amino acid.
Protein quality is usually defined according to the amino acid pattern of egg protein,
which is regarded as the ideal. As such, it is not surprising that animal proteins, such as
meat, milk and cheese tend to be of a higher protein quality than plant proteins. This is
why plant proteins are sometimes referred to as low quality proteins. Many plant
proteins are low in one of the essential amino acids. For instance, grains tend to be
short of lysine whilst pulses are short of methionine. This does not mean that
vegetarians or vegans go short on essential amino acids. Combining plant proteins,
such as a grain with a pulse, leads to a high quality protein which is just as good, and in
some cases better, than protein from animal foods. Soya is a high quality protein on its
own which can be regarded as equal to meat protein.
The limiting amino acid tends to be different in different proteins. This means when two
different foods are combined, the amino acids in one protein can compensate for the
one lacking in the other. This is known as protein complementing. Vegetarians and
vegans eating a well-balanced diet based on grains, pulses, seeds, nuts and vegetables
will be consuming a mixture of proteins that complement one another naturally without
requiring any planning. Beans on toast, cheese or peanut butter sandwich, muesli with
milk (soya or cow’s), and rice with peas or beans are all common examples of protein
complementing.
Previously, it has been thought that protein complementing needed to occur within a
single meal. However, it is now known that this is not necessary as the body keeps a
short-term store of the essential amino acids. A well-balanced vegetarian or vegan will
easily supply all the protein and essential amino acids needed by the body